I ran into yet another explanation of the Monty Hall problem the other day that was rather difficult to follow and it struck me that even though it's a simple problem, I still have not seen an explanation that makes intuitive sense. So here's my take at it.

In case you haven't seen it before, the problem goes a bit like this. You are faced with three doors. Behind one door is a new car and behind the other two doors are goats. Choose a door.

Once you've picked a door, the host will instead open one of the remaining doors to reveal a goat. Now you are given the opportunity to change your choice of doors. Do you stick with your choice or switch? Why?

Most explanations focus on the fact that the host is offering up new information by revealing one of the goats. I don't think that's actually all that relevant. Instead, I'll talk about grouping a bit and hopefully make it obvious why the odds work out the way they do.

For convenience, let's also talk about jewelry boxes instead of doors, cars, and goats. Imagine three jewelry boxes. One has a fabulous diamond ring, and two have the more elemental state of the same--namely lumps of coal.

Now let's toss those jewelry boxes into a couple buckets. One bucket contains your chosen box and the other contains the other boxes. I think you'll agree that this won't change the probabilities of you choosing the ring? 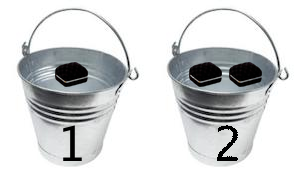 Taking that one step further, we can then logically deduce, that bucket one (holding a single box) has a 1/3 probability of holding the diamond ring and bucket two (holding two boxes) has a 2/3 probability. You're still holding fast at a 1/3 probability of scoring the ring. If you were able to choose between buckets, which would you choose?

Now, logically speaking, since there is only a single ring and two lumps of coal, bucket two must have at least one of those chunks of nothing. It's either holding two lumps of coal or a lump of coal and a diamond ring. But in either case, it's got a 2/3 chance of holding the diamond ring, since we haven't changed the choices at all, we've just dropped them into a couple buckets.

We don't really care about that extra lump of coal, so I'll reach in bucket two, root around for a moment and pull it out. We already knew that it had to have at least one coal, so this won't change anything about probabilities.

Now you have a choice. But instead of of thinking about the boxes this time, think about the buckets. Which bucket has a higher chance of winning? All I've told you by opening one of the boxes was that either box B or box C didn't have the ring in it--and you already knew that!

Clearly you want the bucket with the 2/3 chance of winning, so you should switch your choice to the remaining jewelry box in bucket two.