The awesome power of fucking up 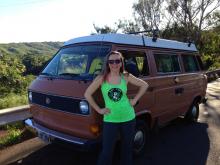 I love watching my students fuck up. No, really. Now you’re probably thinking that I’m some sort of giant asshole, but that’s far from the truth. See, I love fucking up too. Want to know why?

Gather ‘round and let me tell you a story.

Earlier this year, my partner and I took a trip to Maui to get away from it all. We spent a week driving around in a beat up old Westy with a barely working reverse. The first night we were there, we got stuck in a dead end and I had to push the thing backwards up a hill while Kari steered! We biked down Mt. Haleakalā at a ridiculous velocity with giant motorcycle helmets on. I ran the marathon, we went to a lua and other touristy things. And we took surf lessons.

It was the first time that either Kari or I had surfed. I was a little better on the board. I have a marginally better sense of balance, but I’ve also got that arrogant confidence of being able to pretend that broken bones don’t really hurt all that bad. Growing up out in the country will do that to you.

Tavner, our instructor, was a cheeky windswept surf bum through and through. He clearly loved his job and teaching a bunch of naive mainlanders to surf was almost as much fun as ripping the waves himself. He handled each us a little differently. He joked and teased Kari. He called her “Little Ripper” and helped her push off when the waves came. But when it was my turn he bellowed, “GO! GO! GO!” and urged me to chase the waves on my own until I had major noodle arms and could barely hold on to the board.

But in another way, he treated us exactly the same. He pushed us just beyond our comfort zones and drove us to fail.

See, failing is important. You need to fail in order to learn from it. In the surfing context, I needed to learn how far to lean before I overbalanced. I needed to know where to stand on the board. I needed to know what kind of waves I could get up on and which ones to let pass. And the only way to learn these things was to to push the boundaries and learn where they were. This inevitably means a few failures.

The only way to learn is to to push yourself past your limits so you find where they are.

More important than just making mistakes though, is having a safe space to make those mistakes. If I started out with this giant wave, I probably would have died as I explored my limits. Instead, Tavner set us out on the tiniest little baby swells so that no matter how hard we wiped out, the worst injury might be a touch of board rash. Neither of us stayed up for long, but nobody died that day.

The same goes for my classrooms. I push people. I wait until they’ve made mistakes before I help them. When someone asks for answers, instead I give them clues to help them figure out their own solutions. But most of all, I let them fail. A lot.

When students fail in my classroom, they’re failing in a space where the worst consequence of failure is that they have to ask for assistance. There’s no risk of system downtime costing their company thousands as they scramble to figure out why all their database servers imploded. There’s no hours of running into more and more dead ends on Google searches that don’t lead anywhere because they don’t know the right keywords to look for.

Instead, there’s me. I will let them struggle until just before frustration sets in and then I’ll offer hints or help them decipher weird error messages or I’ll help them track down a typo. Learning happens on a Bell curve, with the peak being somewhere between coasting and beating your head against the keyboard in frustration. My job as a learning facilitator is to keep all of my students as close to that peak as I can.

If a student of mine doesn’t fuck up a few times, then I feel as though I’ve done them a disservice.

Like I tell all of my new instructors, I’m not going to sugar coat it. I’d rather that students screw up hard, and get stuck, and run into indecipherable errors, and expose all the warts of the product in class. Because all of these things will happen eventually, but in class they are in a safe space, with someone there to help them out. They’re in a space where they can learn from it rather than hit a roadblock.

Fuck up in my class. I’m there to help you. And every time you fuck up in a safe space, you learn a little more.