Welcome back; gather ‘round. Today we’re going to talk about a topic we’ve all been wondering how to bring up. We’ll be talking about leakage–no, not that kind of leakage!

(Those of you too young to get that joke are highly encouraged to not go look up the history of Olestra in the late 1990s. That’s a Wikipedia rabbit hole that you really don’t want to go down.)

Update: In many cases, environments no longer leak on Puppet 4.8 and above.

Today we’ll be talking about environment leakage. First though, just for completeness’ sake, we’ll need to define what environments are. At the simplest, an environment is just a version of your Puppet codebase that’s separate from other environments. They’re often used to delineate development stages, so you’d have the development, test, and production environments. You may have heard some variation of the phrase, “merge to production.” This signifies that a certain bit of code has been tested and is ready to move to the production stage in its lifecycle. 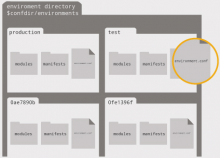 These environments are full copies of your codebase in a directory. When a node requests a catalog, the master will identify the environment that node should get and only the modules within that codebase are used to compile the catalog. This means that a node assigned to the production environment will never get code intended for the development environment.

Or will it? To answer that question, we’ll need to dive into the innards of the compiler.

A Puppet codebase is made up of two types of code, Puppet DSL and Ruby. Understanding this is critical to our leakage conversation. Most code that all but the most advanced users have written is Puppet DSL.

If you need to extend the language or create additional native resource types, though, you’d need to write Ruby code using Puppet’s plugin extension APIs. For example, you could add string manipulation functions to the language like such.

You can also write types and providers to give Puppet the ability to natively manage more resource types2. Note that we are talking about native plugins here. Defined types are a simpler form of resource types that are written in Puppet code. I highly suggest that you use a defined type when possible for simplicity’s sake.

So why are we blathering on about Ruby code? The key is that Ruby based plugins are implemented by creating an instance of a class that’s automatically generated at runtime for each plugin you define. This means that when the compiler reads Puppet code that uses your custom type, it will instantiate an instance of that type’s class so that it knows which attributes are available and how to validate the values you pass in. Each of your functions and types will have an instance in the compiler’s memory space.

Now here’s the critical part. The Ruby bytecode interpreter can only have a single definition of any class in memory. That means that you cannot have more than one version of the reverse function implemented. The first time the function is used, Puppet will read and generate the class and from that point forward, the implementation of that function is set.

If it were that straightforward and obvious, it would suck but it wouldn’t be so sneaky. Let’s talk about threading for a moment. Most Puppet masters are configured with some sort of process model in which a parent process will manage a pool of compiler threads or processes. This is how Apache works, and by extension also how Passenger works. To protect against the possibility of memory leaks, the compiler threads are configured to die off after serving a certain number of requests. Each thread will have its own instance of each plugin that’s instantiated as Puppet builds code using it. Once that thread dies, that bit of memory is released, and the next thread will regenerate the classes in question.

Now here’s the particularly pernicious bit: threads are not constrained to a single environment, and you cannot predict which environment a thread will start its life compiling. This means that the version of a Puppet plugin from one environment can and will be used to compile code for another environment! Yeowch!

So what’s truly affected by this? Luckily, not much. Ruby code that is executed by the master during catalog compilation will suffer from leakage, and the only forms of leakage that will have effects that you’ll notice are those that change behaviour.

Ruby code that is run on the agent, or code that is not run during compilation is not affected. For example, the proper provider will always be used, even if the type that was used to compile the catalog was not the proper version. Code that is run outside of compilation, like report processors or Hiera backends, will always be versions that are synced from the production environment. Templates are also read and compiled on demand, so they’re not subject to leakage.

And echoing my suggestion from above, defined types written in Puppet code are completely contained within their environment. Work is under process to provide more extension points so that functions can be written directly in Puppet code as well.

If you are developing custom Puppet plugins, then your best bet is to do so on a standalone development workstation. Managing a Puppet VM with Vagrant is nearly trivial to do these days.