Why can't I write a contract for consent? 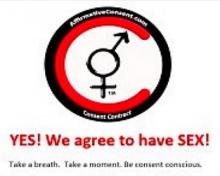 In the Wild West of the Internets, once again some bright young men who operate under the assumption that technology can fix all problems, and who don’t understand how consent works have created an app that’s supposed to protect themselves from the horror of false rape accusations. Never mind that innocent men almost never actually face false rape accusations.

In any case, they feel that if their app records a contract of consent between two people (calling on the powers of the magic blockchain fairy this time!), then they’ll be safe from the wiles of evil wenches and their false accusations. Never mind the fact that this has been tried many times in many different forms and has failed every time.

They’re wrong. In so many ways, they’re wrong. Let’s just analyze one of those ways right now: their fundamental misunderstanding of what a contract actually is. Please note, by the way, that this is the tl;dr, ELI5 version. While I’m happy to correct actual inaccuracies, I’m not interested in debating pedantics or technicalities.

In layman’s terms, a contract is simply legal protection that gives the injured party the right to sue if the terms of the contract are not honored.

What does that mean in real life application? Let’s use some examples. Let’s say that you and I sign a contract that gives you the right to purchase my car for $10k. If you then hand me 10k smackaroos, does that mean that you own my car?

What that means is that if I do not uphold my end of the deal, then you can sue me in court for breach of contract. Assuming that the contract was made in good faith and all the other niceties are met, then I will lose and be required to either honor the contract or pay legal penalties.

That all makes sense, right? Now let’s take that example and change a word. Let’s say that we write the contract to give you the right to purchase my firstborn for $10k instead. Clearly illegal, right? Nope. The contract is absolutely certainly legal, just like the one before. And it gives you exactly the same right–the right to sue me in court if I don’t uphold my end of the deal.

But that’s where the similarity comes to an end. Because while you certainly could sue me, you would lose. And you would probably lose so badly that you would be slapped with a frivolous suit penalty. You would lose because as much as I love the kid, I don’t own her. I have no legal right to sell her. And so your legal contract which gives you the right to sue me for breach is ultimately unenforceable.

So how does that tie into consent?

Quite simply. Let’s now write a contract that says that you and I consent to have sex with one another. That contract is completely legal. You could certainly sue me for breach if I didn’t perform as promised. But this time you would lose.

Let’s break that down a little bit. The common usage of the word give is to grant ownership. If I have a baseball and I give it to you, then you now have a baseball and I don’t. But there are other usages of that word too. For example, if I give you a kiss, or a hug, or a smile, then no ownership changes hands. That is the sense in which consent is given. Looked at another way, if giving you my consent meant that I didn’t have the ability to change or withdraw it, then I wouldn’t just be giving you consent, but I’d also be giving you ownership of my consent. This is more commonly known as slavery. I know some people don’t like to admit it, but slavery has been outlawed for quite some time.

So now remember that all a contract gives you the legal right to do is sue for breach. You would have to go into court with a breach of contract suit saying that “they contracted to have sex with me and did not”. And what you’re actually claiming is “they sold themselves into slavery and aren’t holding up their end of the deal”. What do you think your chances on that suit would be?

But let’s say that you want to turn that around and instead contract to not have sex. That’s no different. Giving up the power to either consent or not consent to sexual behaviour is giving up ownership of my consent. And that’s not a right I can give away. But even if I could, the idea of an injured party is rather questionable at this point. If you agree to not have sex, and you do have sex, who is injured? You? Are you going to bring suit against yourself and claim damages from yourself?

So, we’ve demonstrated why a contract cannot be used to hold anyone accountable to an agreement of consent. This means that you could go get the Supreme Court, the Pope, and all the living & dead members of the Beatles to notarize your contract and it’s still unenforceable. And as such, your contract signed at 5pm still provides zero proof as to my consent or lack of at the time of the deed at 10pm.

This is only the legal reason why such a document or app is not legally enforceable. It doesn’t even touch on all the other ahorrently disgusting ethics involved. There’s plenty already written for that. This is just for those whose fundamental misunderstanding of contract law prevents them from comprehending why you cannot contract away consent.

All this app could provide is non-binding communication about intent. But you don’t need blockchain for that, do you?

A sad goodbye Agent Side F...