Porting the whole world to a new API 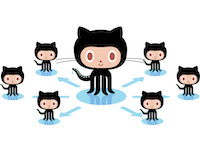 If you maintain Puppet modules, you might have come across a little gift from me as you got back to coding after the holiday season. It’d be in your GitHub inbox.

Not long ago, I put together a tool to help port Puppet Ruby functions from the legacy 3.x API to the modern API. Over the New Year, I ran it through the ringer and updated it to catch a few more edge cases. Then once I was sure that it ported all valid–or nearly valid–functions I wrote a simple loop to update every Puppet module in all of GitHub. Maybe even one of yours.

GitHub maintains a fantastic public dataset of all sorts of interesting information about public repositories. This means that getting a list of all the Puppet modules with legacy functions is as simple as

The BigQuery Console makes it trivial to run a query and save the output. The first interesting thing I noticed was that the list was far shorter than I had expected. The list was only about 985 rows, and many of them were clearly forks. It looked like there were only about 350 unique repository names.

That’s not bad at all. That means that we’ve done a better job at upgrading the ecosystem than I’d feared.

But before I set my porting robot loose, I wanted more confidence in it. Up until that point, I’d run it on a limited number of modules, and even so I’d already missed one blindingly obvious use case!

So I wrote a quick script to clone each repository down, run the porting tool, and then delete it if successful. Once it completed, I was left with 47 modules that it had failed on. Some of the errors were trivial and silly. For example, I’d forgotten that module skeletons of the past had often created the lib/puppet/parser/functions directory with nothing but a quick README!

But I did make quite a few improvements. There were a few calling syntaxes that I hadn’t accounted for, and several modules used frozen string literals, and a few other things. It took a bit of work crawling through code and then updating my tool to account for the edge cases. But after a few hours of work, I was able to do another run with no failures except for functions that didn’t compile in the first place.

So then it was time to run for real. I expanded my loop to do a bit more. After cloning the repository, I also forked it to my own namespace. Then after a successful port, the script would commit the code, push it to my fork, and then issue a pull request using the hub command-line tool.

I also put in a quick API check to skip forks and only offer fixes to the upstream repository. This proved problematic, which I’ll talk about shortly.

I started the script running and validated that it was processing the list and submitting pull requests. Then my partner and I headed out for an evening. (And by that I mean, distract me from the idea that it might break and spew garbage PRs all over the ecosystem!)

At the crack of noon the next day, I checked in on the list of pull requests to find a small surprise! Instead of the 350 or so that I expected, I was looking at a list of over 500 pull requests. Clearly my fork detection didn’t work reliably. The best I can guess without logging or error checking was that I’d been rate limited and instead of JSON to parse, my curl call was returning an API error. Clearly I should have been using the Octokit gem directly instead of being lazy and just shelling out.

But otherwise, everything seems to have gone as expected. The response was a little mixed, everything from

Cute idea, however I’m not going to merge it unless someone gives it a smoke test at least.

The most annoying inconvenience was that it created detached pull requests, which meant that collaborators couldn’t update the PR and keep the complete function port contained within a single PR. I don’t want 500 extra repositories cluttering up my namespace, so the script had deleted each one after submitting the pull request.

There were also a handful of autoresponders that instructed me (or my script 🤣) to do things that I didn’t quite have the motivation for. For example, OpenStack sent me to the Developer’s Guide with instructions to set up an Ubuntu One account and configure Gerrit. Another bot told me to request a review, but then linked to a doc that didn’t exist!

One of my favorite outcomes was how many old and unmaintained repositories it’s already identified. A pet peeve of mine is stumbling into a GitHub repository and not knowing if it’s still maintained, or where the fork that is maintained might exist. Many responses to the PR this submitted were to delete or archive a forgotten and unmaintained codebase and a cleaner ecosystem always makes me happy.

Looking back at the results, there were a few things that I should have done slightly differently. It may have been worth creating a dedicated GitHub user and just leaving the source repositories in place to avoid the detached pull requests. I should also have also DCO signed my commits with the Developer Certificate of Origin.

In any case, I think I’m calling this a resounding success. This is the largest ecosystem update that I’ve automated so far, and I’d by lying if I said I wasn’t a bit nervous as I kicked it off. Nevertheless, each time I learn a little more. And each time more ideas mature about the next way for improving the Puppet developer ecosystem.