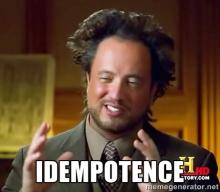 You may have read some docs, or stopped by the #puppet IRC channel. You’ve likely read a blog post or two. You’ve probably run across the word idempotence or have been chastised for writing non-idempotent Puppet code with exec resources. But what exactly does that mean? Here’s a definition that you might see in a calculus class.

denoting an element of a set that is unchanged in value when multiplied or otherwise operated on by itself.

Well, there’s that. We can all go home now; question answered.

Actually no. How about we talk about it in English words? Idempotence is simply a word that describes an operation that will have the same effect whether you run it once or 10,001 times. Adding one is not idempotent because the result keeps incrementing, but multiplying by one is idempotent because the answer is the same no matter how many times you multiply it!

Well, that’s still math. How about a more concrete example. Imagine a time when you were 12 and your mom asked you to take out the trash. Being the good kid you were, you dropped the GameBoy and jumped right up to do as you were asked, yeah?

But then 30 minutes later when she walked back through the living room and saw you curled up on the couch playing Super Mario Land, she told you again to take out the trash. I strongly suspect that you did not leap up to go take out an empty trash bag.

Coincidentally, this is exactly how Puppet works. Every time the Agent runs, it has the same set of instructions captured in a catalog. These instructions tell Puppet the state it should manage, and might look something like this:

This tells Puppet to make sure that a certain user exists and is a member of the right group. It makes sure some packages are properly installed, and that there’s a symlink on the user’s desktop. Notice that I didn’t describe it as instructing Puppet to install packages. It does not say that at all. It says to make sure they are installed. This means that if the packages are not installed that Puppet will install them, but if they’re already installed it won’t try to install it again.

Quite a useful concept, no? This is what allows Puppet to run periodically and verify that the system is configured properly. If the node is accidentally changed to take it out of compliance, then Puppet will converge it back into compliance. If you update the instructions in your manifests, then Puppet will update the node’s configuration to match. If disaster strikes and you need another machine exactly like this one to replace it, you can simply apply the same configuration to the new machine via classification, which we’ll cover another day.

So how about that time you were chastised for writing non-idempotent execs? People new to Puppet generally have shell scripts they’re replacing, and they write code that looks sort of like this:

So what’s wrong with that? It works, right? Download the tarball, extract it, install the thing, then clean up after yourself. It looks like it should run perfectly, assuming no typos or network issues. And it will.

But it will run perfectly every time Puppet runs.

In other words, it will download and run the installer script every thirty minutes! A much more robust pattern takes advantage of the idempotence attributes that the exec resource type offers.

This resource description tells Puppet the files that will be created, ['C:\Chocolatey','C:\ProgramData\chocolatey']. If they already exist, then Puppet assumes that the command has run successfully and won’t attempt to invoke it again. Much better.

An even better pattern would be to package the installer as a system package–RPM or DEB or the like. Then you can just use the built in package type to manage it, including upgrades and removal. This is much easier than you think using something like Jordan Sissel’s most excellent fpm tool. That reduces our nasty Puppet-as-a-fancy-shell-script-engine code above to something like: